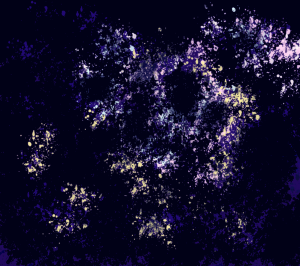 A couple of months ago, I signed up for the first of four parts of an online course in mythic structure. We’re now partway through part two, and I find myself working on a long, narrative poem about a warrior who goes to Hell to seek revenge for his slain fellows.  I started this particular poem as a homework assignment, and in spite of my feeling that the poem was complete in itself, the comments by my fellow students (“what happens next?”) led me to continue it.  I don’t usually write horror stories — in fact, I’ve never written one — but the poem does have its grisly elements. Here’s the first stanza from Part II:

Jovan  strode down a narrow path

where walls gave off an eerie light

and crunch of bones beneath his feet

If I had to write about this in prose, I doubt I would have come up with anything close to this, but somehow writing in rhyme freed me.   The  poem is the longest I’ve written, and it’s far from finished.  It’s about 26 four-line stanzas so far.

I worked on a number of poems for part one of this course, including another where a soul goes down to hell.

Of all the story structure types I’ve studied, this one — the hero’s journey — feels the most natural. I read lots of Robin Hood, King Arthur, fairy tales, Greek and Roman mythology, and the like growing up, and apparently absorbed a lot about about the scaffolding without being aware of it.  All in all, a fascinating subject, and a rich source, for me, of poetic inspiration.

The Gates of Hell

He stood before the gates of hell

to bargain with a shade.

He drew a breath, then struck the bell

and drew his heavy blade.

The gate was formed from primal fire,

glowed with a steady flame.
But in that hell, his heart’s desire,

and on his head, the blame.

The shadow slipped between the glow

that formed the fiery gate.

Dar raised his sword to strike his foe.

“If you would see your love once more,

then listen now to me.

While men have entered hell before,

no man has broken free.”

so shadow, stand aside.

The shadow bowed, and with a glance,

Though I’ll remain in hell,

my story will be know above.”

Then did the death-bells knell.