On February 5, I introduced Saleema, one of our workshop winners. I noted that Saleema was a winner in our Persona category. Today I’d like to share that winning poem with you, as well as a follow up poem she has since shared with us. In a Persona, the poet writes in the voice of another person or thing. As you’ll see below, Saleema really immersed herself in this challenge.

I choose Jalāl ad-Dīn Rumi, a 13th century Sufi poet, as the voice for the assignment.

Following is a short clip about Rumi and his teacher Shams Tabrizi: 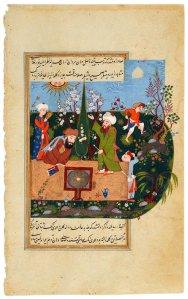 “Shams-i-Tabrīzī… is credited as the spiritual instructor of Mewlānā Jalāl ad-Dīn Muhammad Balkhi, also known as Rumi. Shams is referenced with great reverence in Rumi’s poetic collection, Diwan-i Shams-i Tabrīzī (The Works of Shams of Tabriz).

According to contemporary Sufi tradition, Shams Tabrizi mysteriously disappeared. Some say he was killed by close disciples of Mewlānā Jalāl ad-Dīn Rumi, who were jealous of the close relationship between Rumi and Shams. It is also said that Shams Tabrizi left Konya and died in Khoy, where he was buried. Sultan Walad, Rumi’s son, in his Walad-Nama mathnawi, just mentions that Shams mysteriously disappeared from Konya with no more specific details.

As the years passed, Rumi attributed more and more of his own poetry to Shams as a sign of love for his departed friend and master. In Rumi’s poetry Shams becomes a symbol of God’s love for mankind; Shams was a sun (“Shams” means “Sun” in Persian) shining the Light of God on Rumi.”

[Above Information is from Wikipedia]

Note: I used the speakers name (Jalāl ad-Dīn) at the end of the poem, because Sufi poets often mention their own names in their poetry.

The day you left my heart’s sun set
Heaviness haunted every breath
Your prayer carpet felt forlorn
Bereft I twirled, alone, undone
Your guidance quit
without a glance, a hint, a word

Yet, while I longed for your return
Piece by piece
my heart began to burn
Whispered words thundered
through my throbbing core
Would you raise me above the sky,
then hide a Sun that lights the way?

No! Shams would not abandon
what he loves
A mother caringly shares her breast
when she hears her hungry child cry
Neglect is not my Shams’ way
So, I will surrender to your whim
Let all think Jalāl ad-Dīn’s alone again

Like a possum I’ll play dead
while your songs ring louder than before
with words so clear they’ll shutter nights
in notes that tell of all you taught
The Divan-i Shams-i Tabrizi
Takes me to untraveled heights
Where in the One, all reunite

The following poem was written as Sham’s answer to the poem written in Rumi’s voice (about Shams’ leaving).

NOTE: The dervish Shams-e Tabrizi had traveled throughout the Middle East searching and praying for someone who could “endure my company”. 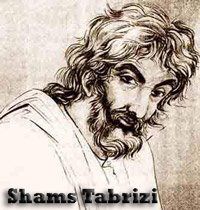 A voice said to him, “What will you give in return?”
Shams replied, “My head!” The voice then said,
“The one you seek is Jalal ud-Din Rumi, of Konya.”

(Wikipedia/Mawlana and Shams by Sefik Can)

Our yearning drew me back again
Al Noor revealed
Clandestine sight
We twirled, then rested
in Its sparks

Only you endured
my company
Reveled in my
sacred subtleties

Mumit’s roasting pot…
too bright for foes
One birth, one death,
that’s all they know

Quickening happened
You began to soar
Our destiny
at last fulfilled

Spin until we are no more!

Thank you again, Saleema, for really embracing this form, and for allowing us to share your work here.

6 thoughts on “Saleema and Persona poems”